Evomail+ for iPhone arrives as a rebuilt, redesigned email client for iOS 7 – CE: The Magazine (2014) 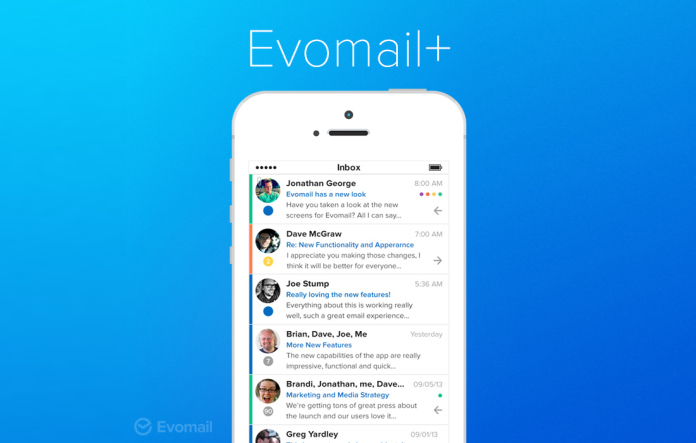 I think it’s safe to say we all have a love/hate relationship with our email. We either get too much of it to deal with, we hate the way it works, or we hate the app we are forced to use to get it. Personally, I don’t hate email itself, and I usually don’t get very much of it. But like many people, I hate the apps I have to use to get my email. Apple’s Mail.app on iOS and OS X is barebones, tired, and does not support modern email features like labels and stars. I don’t like web apps, so I refuse to use Gmail, Hotmail, or IMAP in a browser. Google’s Gmail app for Android is pretty good, but their stock “other” Mail app leaves much to be desired. And don’t even get me started on Microsoft Outlook.

For a long time Sparrow was my favourite email client. But in July 2012 they were acquired by Google, development of their apps ceased, and I was suddenly forced to search for an alternative. What I quickly discovered in my search is that there aren’t many people making email apps, at least not any really good email apps. I’ve tried Google’s Gmail app for iOS, Airmail for Mac, Mailbox for iOS, and even returned to Apple’s Mail.app for a brief stint. Some of these apps don’t allow me to have all of my email accounts in one place; some don’t support power user features that I use; others are missing design flare; and so far, none of them have stuck.

Then I discovered Evomail, a clean, modern email client with support for every email service and protocol I use. Similar in design and functionality to Sparrow, it seemed that Evomail would put an end to my long and frustrating search. As it turns out, Evomail originally grew out of a similar frustration.

“It was 2012, email was stale, and no clients were taking advantage of the advancements in cloud computing and storage that had happened in the last decade,” explains Jonathan George, co-founder and CEO of Evomail, in an email interview with CE: The Magazine, “Our initial goals were simple: evolve email beyond what it is by building a layer on top of email and a set of gorgeous email clients using that backend.”

Evomail was originally released as an iPad-only, Gmail-only app in May 2013. An iPhone version of Evomail followed a few months later, though at a somewhat unlucky time: it launched for iOS 6 mere days after Apple unveiled the completely redesigned iOS 7 last June. On its launch day, Evomail for iPhone already needed a refresh.

“iOS 7 gave us an amazing opportunity to hit our brakes for a bit and really refresh the things we’re doing,” says David McGraw, Evomail co-founder and chief developer. “We’ve really refreshed our iOS version from several angles that will provide a really fantastic experience.”

Today the company launches Evomail+, an entirely new app redesigned and rebuilt for iOS 7 on the iPhone. Far more than a simple redesign, Evomail+ combines its beautiful UI with intuitive gesture controls, traditional inbox elements, and modern productivity features. That balance of old and new is one of my favourite things about Evomail; it immediately feels familiar, yet also fresh and modern. Unlike competitors such as Mailbox and Triage, the Evomail team has not set out to reinvent the way users think about and manage their email. As their tagline proclaims, their goal is simply to provide “Modern Mobile Mail”.

“Email is amazing, it’s just stale — so we’re modernizing it,” George says. “We’ll always offer the traditional experience, but we want to build an interface that learns about how you use email. That’s the trick: everyone uses email differently, so how do you best service that?”

To accomplish that daunting task, Evomail+ includes a large assortment of features, all welcome. Your main inbox is a traditional list of email messages, sorted chronologically. Tap a message and it opens. You can also swipe messages right to archive, or left to delete. Tap and hold a message and you’re greeted with an action menu with options to Label, Snooze, Favourite, or Mark Unread (which can also be mapped to the left and right swipe gestures in Settings). Evomail+ also includes the increasingly popular “Snooze” function, allowing you to hide a message and have it re-appear later when you need it. Default Snooze options include Later Today, Tomorrow, Next Week, or you can set a custom time.

One of the most unique features of Evomail+ is the One Button, a small blue circle that lives in the bottom left corner of the app. In your Inbox, a single tap of the button brings up the compose window. Pull the button right to open the Accounts and Folders menu, which can be used to switch accounts, jump into the Unified Inbox, or browse folders and labels for the active account. Pulling up on the button in the Inbox invokes edit mode, so you can batch select, label, snooze, archive, and delete messages. Long-pressing on the button opens a menu for filtering your inbox to display only unread emails, messages with attachments, or starred/favourites messages. Long-pressing the button in the message view displays options to reply, reply all, and forward the current message. It’s a unique, intuitive control once you come to learn all of its uses.

Of course Evomail+ has also been redesigned for iOS 7, and it looks great. Since all navigation is accomplished using the One Button, Evomail+ has no top or bottom nav bars, so your email gets a nice, big full-screen view. As you might expect, everything is very simple, flat and white. Email accounts are colour-coded, and inbox messages receive a charming coloured highlight along their left edge to distinguish which account they belong to. In the message view, that colour-coding carries into the subject bar at the top of the screen, a simple but nice touch. The app also displays contact photos in the main inbox and message views, making for a very visual UI (and I love contact photos, so this makes me very happy). Overall Evomail+ is a very well designed app that fits in beautifully with the iOS 7 design aesthetic.

Feature wise, Evomail+ has pretty much everything I want in an email app. Multiple accounts, support for Gmail and IMAP, a traditional inbox, labels and folders, swiping gestures, contact photos, and a beautiful iOS 7 inspired design.

“We’re laser focused on listening to customers–it’s all about them,” McGraw says, “If something exists, and it works well, expect us to seriously consider it. Expect us to experiment with completely new ideas of our own in the near future. In the end, the customer will help guide where we focus our sights.”

I do have some complaints. Evomail+ feels very slow in places, particularly when loading search results, labels, and folders. Many of the animations and transitions are jittery and could use some improving. I’ve also noticed some major server-side bugs; on occasion some old, archived messages have re-appeared in my inbox, and new messages still in my inbox have inexplicably disappeared. New mail doesn’t always show up in my inbox immediately, and I still get an error message when trying to add my Google Apps email account, so I can’t use Evomail+ for work email. (Editor’s Note: these impressions have been updated to reflect the final shipping version of Evomail+. A previous version of this article included impressions of a beta build of the app.)

That being said, we’re in the very early days of Evomail+. The team promises they are hard at work improving their clients and their recently announced EvoCloud backend, and I expect both will continue to improve as time goes on.

For a small start-up from Wichita, Kansas, Evomail+ is impressive, and definitely worth a look for anyone frustrated with their current email client. At this point Evomail+ still feels quite buggy, and it could definitely use a bit more UI polish. However, I believe that with a little more time Evomail+ can mature into an absolutely fantastic iPhone email client.

Evomail+ for iPhone is available for free on the iOS App Store.